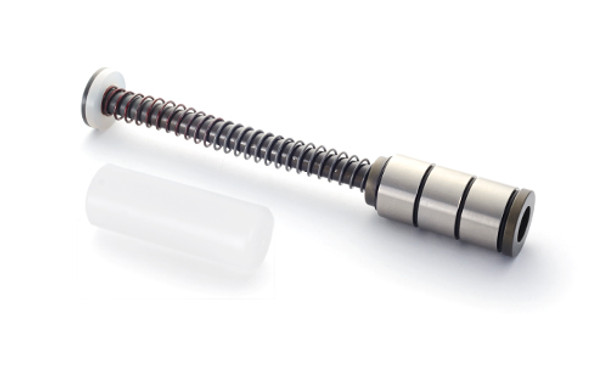 SKU:
JPSCS2-10
UPC:
MPN:
Availability:
In stock if you can add to your cart!
Shipping:
Calculated at Checkout

Includes spacer to allow for installation in both carbine- and rifle-length buffer tubes.

The JPSCS2-10 is not compatible with the HK MR762, the Sig Sauer 716, or the Rock River Arms LAR-8 because of its longer bolt stroke and subsequently longer extension tube.

The “spoon over a cheese grater” sound emitted by modern sporting rifles whenever they’re charged or fired has always been one of the AR platform’s ugly blemishes and one we’ve worked ardently to eliminate.  After years of specially selecting buffer tube manufacturers based on the quality of their tubes’ interior finish, we opted to design and produce our own action springs with a perfect centerless-ground and precision-polished outside diameter.  These JP Custom Buffer Springs are an inexpensive way to see exactly why we have a reputation for having the quietest, smoothest rifles on the market.

Our pursuit of perfection didn’t stop with springs though and led ultimately to the creation of the patented Silent Captured Spring in 2012. Maintaining all the benefits of our polished buffer springs and proprietary LMOS™ buffer, this combination buffer-spring assembly eliminates the friction of standard buffer components resulting in outstanding smoothness and sound abatement. What’s more, the spring is removable from the assembly for custom tuning, and both the AR-15 and AR-10 versions of the JP Silent Captured Springs are functional in rifle- and carbine-length operating systems. The AR-15 version fits and functions in any gas-operated AR-15 variant, regardless of caliber and the AR-10 version should fit and function in any large-frame AR-10-type platform. The JPSCS is not compatible with any 9mm AR variant or any blowback system using a solid (weighted) carrier.

MSRP:
Now: $11.95
Was:
While you can use a standard buffer retainer pin and spring with your Silent Captured Spring, installation and removal is difficult to say the least. Until now, that's left the only...

MSRP:
Now: $244.99
Was:
Law Tactical Folder Silent Captured Spring Package AR-15 Heavy H2 The Law Tactical Folding Stock Adapter is far and away the most popular and capably designed device of its type. The only...

MSRP:
Now: $65.00 - $99.00
Was:
The Geissele Super 42 Spring was designed to improve the function and reliability of your AR-15 pattern rifle. Its unique spring design uses three independent strands of wire, just like the...