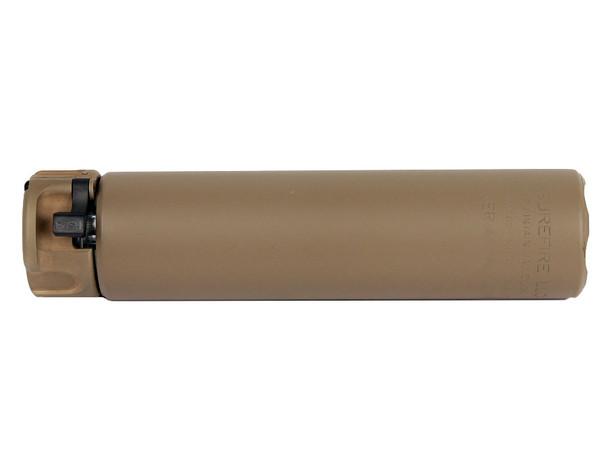 SureFire has rewritten the rulebook on versatility with the SOCOM762-MINI2, the smallest and lightest 7.62 mm (.308 caliber) option available in SureFire’s class-dominating line of SOCOM suppressors. Primarily designed for 16-inch or longer barrels, the SOCOM762-MINI2 is light and compact, but it delivers a tremendous reduction in sound signature, a testament to the strict design, engineering and manufacturing standards applied to every SureFire SOCOM suppressor. It’s precisely why we emerged victorious in the US Special Operations Command’s (SOCOM) brutally demanding suppressor trials.

The SOCOM762-MINI2 is constructed of advanced Inconel alloys and stainless steel, and CNC laser-welded to exacting standards for strength and rock-solid dependability even when used in full auto mode. SureFire’s innovative internal baffling design results in enhanced gas-flow dynamics, and decreased back pressure and cyclic rate, to minimize sound and dust signatures. First-round muzzle flash is also virtually eliminated.

Built for consistent performance and a long service life, every SureFire suppressor is proudly designed and manufactured in the USA.

MSRP:
Now: $1,799.99
Was:
The SOCOM338-Ti for .338 Lapua sniper rifles is a combat-ready suppressor hewn from high-grade titanium, one of the world’s lightest and most durable materials. Designed and built with extreme...

MSRP: $1,099.99
Now: $989.99
Was:
SureFire SOCOM556-RC2 - Black When SureFire submitted its SOCOM556-RC suppressor for consideration by the US Special Operations Command (SOCOM), we expected that the road to certification...

MSRP:
Now: $1,079.00
Was:
Extreme Accuracy: Every SOCOM65-RC2 is tested and verified to deliver minimal and 100% repeatable impact shift while providing significant sound attenuation for 7.62 mm/.308-caliber rifles...

MSRP:
Now: $849.99
Was:
The Dead Air Sandman-S FDE has all of your iconic Sandman-S features in a new color – flat dark earth. This rifle suppressor weighs 17.7 ounces and a 6.8-inch length, providing a compact,...