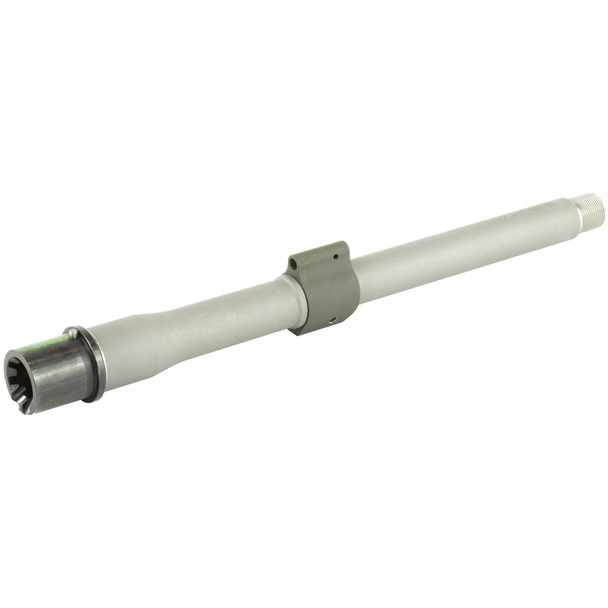 Noveske's 300 AAC BLACKOUT is designed to run optimally firing both subsonic suppressed and supersonic unsuppressed. This barrel is tuned to lock back on the last round using subsonic 220 and 208 grain ammunition with a sound suppressor. The firearm may not lock back with subsonic 220 and 208 grain ammunition without a sound suppressor. Also, the subsonic 300 BLK ammunition is more susceptible to a malfunction due to carbon fouling and adverse conditions than supersonic ammunition. The barrel is tuned to operate correctly with the back pressure provided by the AAC 762-SDN-6 using an H2 buffer, or a Surefire 762K suppressor and an H buffer. In the development of this barrel, testing found evidence that the suppressor may require a symmetrical baffle stack as found in the AAC Cyclone K, 762-SDN6, and Surefire 762K suppressor. Suppressors which cause off axis turbulence, such as those with K type baffles, may cause baffle strikes and/or point of impact shift, and may damage your suppressor. Noveske Rifleworks LLC will not be responsible for damage or injury under ANY circumstances. Consult you suppressor manufacturer to determine if your suppressor is suitable for this application.

MSRP:
Now: $370.00
Was:
Noveske is proud to manufacture premium barrels for all types of builds. This barrel ships with gas block. This barrel is designed for the Noveske gas block that is 1" long (INCLUDED). A standard...

MSRP:
Now: $262.95
Was:
The Noveske NSR (Noveske Skinny Rail) Handguard was designed with the goal of being the lightest and smallest free float forend option for the Modern Sporting Rifle enthusiast. If you own an AR-15...

MSRP:
Now: $425.00
Was:
The barrel ships with gas block. This barrel is designed for our gas block that is 1" long (INCLUDED). A standard front sight base is 1.9" long and WILL NOT FIT. Barrel installation should be...

MSRP:
Now: $289.00
Was:
Seekins Precision barrels live up to the company's name. Precision CNC machined to match grade specifications from the best quality 416 stainless steel blanks available, each barrel is inspected no...