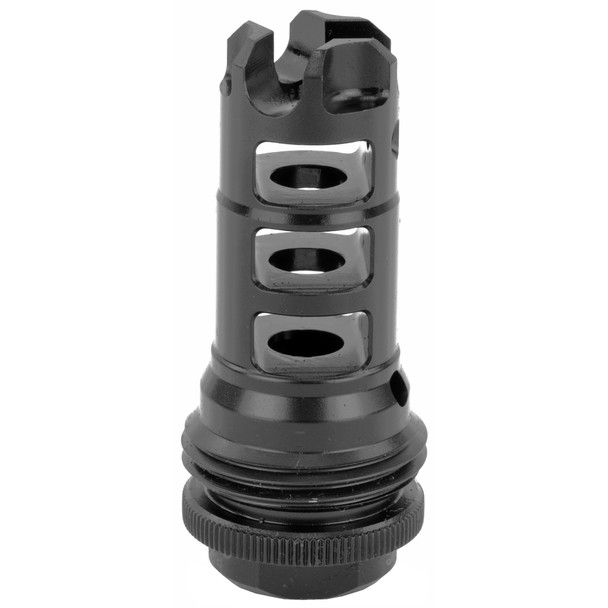 LANTAC DGN556B-ASR(TM) Dragon(R) Advanced Muzzle Brake with SilencerCo(TM) ASR Quick Mount Suppressor Adapter. The DGN556B-ASR(TM) is precision machined, hardened to 48Rc and nitride finished for enhanced corrosion resistance. It features Lantac's patented gas handling system that reduces muzzle rise and recoil to zero, meaning that the only recoil felt by the shooter is from the movement of the carrier and buffer within the buffer tube. Its unique Short Energy Pulse system reduces length of recoil so that repeating shot energy cannot overlap and knock the shooter off target. Full auto fire is possible with massively reduced recoil and muzzle climb, meaning that all shots fall on target. With the addition of the SilencerCo ASR quick mount system it is now possible to mount the SilencerCo Saker, Omega Suppressors and the Blast Shield. The DGN556B-ASR(TM) Brake/ Mount is threaded 1/2-28UNEF and is designed to be used with 5.56/.223 Caliber ammunition only.

MSRP:
Now: $144.95
Was:
High quality components and precise manufacturing make Lantac parts ideal for maintaining and upgrading firearms. The durability, reliability and excellent build quality of these parts will ensure...

MSRP: $162.00
Now: $129.99
Was:
The ASR (Active Spring Retention) Mount is a quick attach / detach system for almost all SilencerCo suppressors. The simple one-hand-on, one-hand-off mounting system is compatible with all ASR Muzzle...

MSRP:
Now: $144.95
Was:
High quality components and precise manufacturing make Lantac parts ideal for maintaining and upgrading firearms. The durability, reliability and excellent build quality of these parts will ensure...

MSRP: $249.00
Now: $224.99
Was:
Dead Air Key-Mo Mount for SilencerCo Saker The Key-Mo changes your Saker ASR to a quick attach, making it compatible with any of Dead Air muzzle brakes or flash hiders. If you’re one...

MSRP: $92.00
Now: $74.99
Was:
SilencerCo ASR Muzzle Brake Mount 1/2-28 This 3-port muzzle brake is compatible with the ASR mounting system. They offer one hand on, one hand off attachment/detachment. The 3-port design...

MSRP:
Now: $85.00
Was:
Q Bottle Rocket Enhanced Brake The Bottle Rocket™ by Q® is an enhanced brake for use with our Cherry Bomb™ muzzle brake. On top of that, it also serves as a...