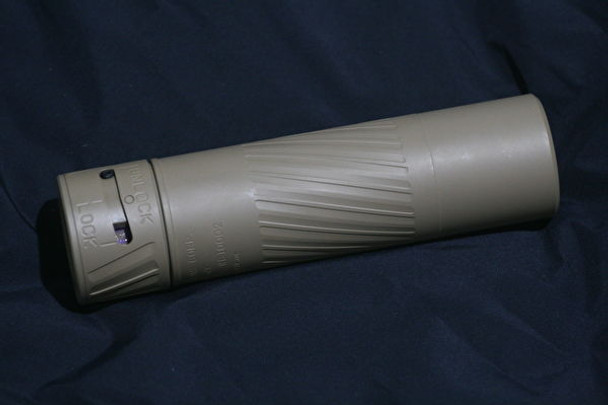 SKU:
dominus-sr
UPC:
MPN:
Availability:
In stock if you can add to your cart!
Shipping:
Calculated at Checkout

It is a true light-weight "Go To War" suppressor and is perfect for 5.56 assault rifles and .30 caliber battle rifles, including SBR variants. It retains the accuracy and repeatability TBAC is known for. It's equally at home on a 0.25 MOA bolt rifle on the 1500-yard range as it is on a MK18 in the CQB house.

The 6.95-inch DOMINUS-SR meters at 137 dB (milspec left/right) and 126 dB at shooters-ear1 on a 20-inch .308. This puts it right between the Ultra 7 and Ultra 9, These are numbers from our PULSE system which should be considered definitive, supplanting all data from the older 2209 sound-level meters.

The DOMINUS-SR features our "SR" quick-attach/detach mount to provide Secondary Retention, retention during hard-use and heat cycles, and precision-rifle-level accuracy.

The DOMINUS-SR is rated for what we call a "Hard-Use/Full-Auto" (HU/FA) firing schedule. We specify this as surviving at least 10 cycles of the SOCOM/SURG firing schedule. The SR mount keeps the suppressor tight throughout each cycle and is a key feature in enabling this rating. After 10 SOCOM/SURG cycles, a test unit metered 1 dB louder than a brand new unit. The SR mount still functions and is easily removed at the end of the series of cycles (see video on the right-hand column).

HOW OUR MOUNT IS DIFFERENT

The SR mount uses a novel paw and cam-path system to ensure that "full lock up" can happen in either of the two adjacent detent slots for any given final shouldering position of the suppressor on the conical brake shoulder. This categorically avoids the "off by one" problem that many "clicky" mounts have. The SR mount has the exact same accuracy, repeatability, and return-to-zero characteristics that all our precision suppressors are known for.

How can Titanium be full-auto rated?
Titanium is tough. Most of of the material data on titanium is obtained by heating up the material and applying a static load. While that data is helpful, a suppressor sees very different stress/load characteristics. Over the last three years, we've developed our own material data experimentally and used that to design a very light but strong, full-auto rated titanium suppressor. This process involved testing many titanium prototype suppressors to failure.
SOCOM requires a suppressor to survive six cycles of the eight-magazine firing schedule (the SOCOM/SURG schedule). This suppressor is guaranteed to survive 10. For reference, the 17-4 steel muzzle brake must be replaced every four cycles.

This is .30 cal -- where's the .223/5.56mm version?
Short answer: The .30 cal version is the 5.56 version.
The DOMINUS-SR, in its native .30 caliber, was designed to have minimal blowback on 5.56 semi-auto and full-auto rifles. We put a lot of effort into minimizing the blowback without giving up sound suppression performance.

How does baffle erosion affect sound suppression?
After 10 cycles of the SOCOM/SURG firing schedule, we metered a test suppressor and it was 1 dB louder than when it was brand new.

All these firing schedules are for 5.56-- what about .30 caliber?
Our testing and analysis has shown that the SOCOM/SURG test in 5.56 is harder on the suppressor than a similar test using 12.5-inch .308's. The analogous .30 caliber firing schedule from SOCOM is 6, 20-round magazines and this does not provide heat input close to the 5.56 test protocol.

Why isn't this suppressor "Modular"?
We design a suppressor for a specific purpose and the entire design is optimized to best accomplish that goal. This is the first light-weight precision rifle suppressors that is also a hard-use/full-auto suppressor. Adding modularity might make it "seem" like the suppressor is more adaptable but it actually becomes a hindrance to the primary design goals. Forcing modularity often requires a compromise to things like: repeatability, weight, or strength. Most modular or adaptable suppressors do "Okay" at a variety of applications but aren't "GREAT" at any of them. We design our suppressors to be "The Best" at what they're designed for.

What service does the SR mount require?
Please refer to the Operator-level SR Series Instructions.

Why is the CB version of this suppressor not full-auto rated? Isn't it the same suppressor as this one, just with a different mount?
The CB version is mostly the same as the SR version, except the rear end is different. Thus the strength of the suppressor itself is the same, but without the retention and locking capabilities of the SR mount, the CB mount does not retain the "Full Auto" rating. Other than that, the minimum barrel length ratings will be the same.

If the DOMINUS-SR is still grade 5 titanium like the ULTRA series, why doesn't the ULTRA series have the same hard-use rating?
The DOMINUS-SR was designed and tested for this specific use and has structural differences compared to the ULTRA series. In addition, the SR mount will keep the suppressor tight during the full-auto parts of the firing schedule, which cannot be guaranteed with the CB mount.

Why doesn't this look like other "tubeless" cans? What's the deal with tubeless?
Conventional centerfire rifle suppressors are typically built with a tube, a baffle stack that includes the thread or mount-end, and a front endcap. The "right way" to build a suppressor like this is to fully weld the entire baffle stack together, insert it into the tube, and then weld it together again. When done properly, both the baffle stack and the tube contribute to the pressure rating of the suppressor. A "tubeless" design is simply one in which the baffles are welded together and all the finishing operations are done to the outside of the resulting suppressor body, and no tube is placed over the welded baffle stack. When both designs are done properly and to the same strength rating, the tubeless design enjoys a very slight weight advantage; but it's mainly a lot "cleaner" to manufacture, with few operations that can warp the suppressor or leave it with residual stresses. Many people consider a "tubeless" design to be more advanced than "tubed" designs; but really, the end-user shouldn't care how it's built because you can build a great suppressor either way, and there are some good reasons to stick with tubed designs.

My SR collar isn't straight/square/aligned when I tighten it, is it broken?
No. The collar is not intended to stay perfectly parallel/square to the body when locked. The play is there on purpose for clearance so foreign material does not compromise functionality of the locking mechanism.

1. Measured in accordance with MIL-STD-1474D using a BK PULSE SLM with mics at specified locations

Note on dB ratings
We now specify the dB rating as a single number due to the long-term consistency of the B&K PULSE system. These should be considered the "reference" numbers compared to anything published previously -- please see our youtube videos.

MSRP:
Now: $999.99
Was:
The Thunder Beast Arms Corp. ULTRA 7 is their highly efficient compact precision rifle suppressor. It is best for applications where a compact form factor is important but excellent...

MSRP: $1,099.00
Now: $975.00
Was:
The Nomad-Ti is an exercise in displaying our latest engineering and manufacturing capabilities. Thanks to its ultra-light weight of just 9.6 oz it will feel as if it disappears on your rifle...