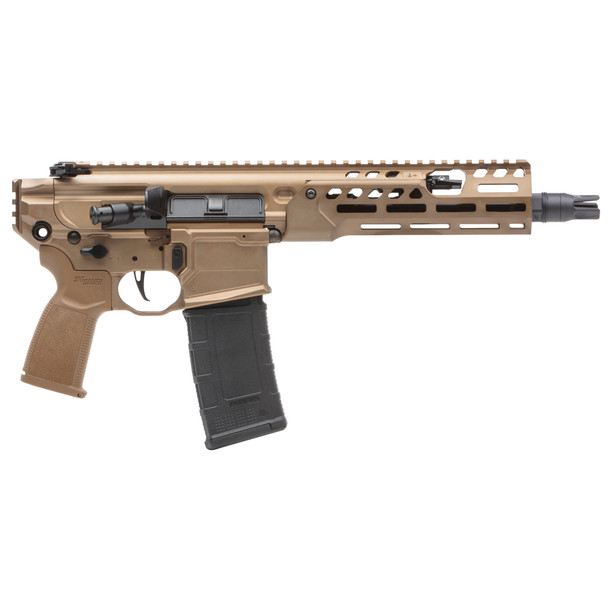 The MCX Spear LT 300 Blackout Pistol is the latest evolution of the popular MCX platform from SIG SAUER, building on the success of the MCX Virtus, with a number of enhancements for improved accuracy and modularity.

The MCX-SPEAR LT is backwards compatible with standard AR trigger packs, opening a world of modularity that was lost with the Virtus, while also slimming the rifle down.

The MCX-SPEAR LT features a redesigned handguard and other tweaks that drop almost a pound in weight when compared to the Virtus.

SIG developed the MCX series back around 2014 with a particular customer in mind and then transitioned it to fill both the demands of the military, such as the Army's new 6.8mm Next Generation Squad Weapon-Automatic Rifle or NGSW-AR, and the consumer market, namely with the MCV Virtus line. With all that time and success in the rearview, SIG decided, rather than sit on its laurels, to instead push the platform to the next level.

MSRP: $2,749.99
Now: $2,499.99
Was:
The SIG MCX Rattler is the ultimate compact and agile weapon. Its rapid deployment capabilities and precision design make it the perfect choice for fast-moving operators. The 5.5" PDW barrel and...

MSRP: $745.00
Now: $620.00
Was:
Introducing the newest addition to the Glock family: the Glock 47. This full-size 9mm pistol was originally introduced to the market in 2019, but was only available for purchase by Department of...

MSRP:
Now: $3,499.99
Was:
The Honey Badger by Q®: Your new Personal Offensive Weapon. The original Honey Badger was developed at AAC by previous owner and Q CEO, Kevin Brittingham and his R&D team...