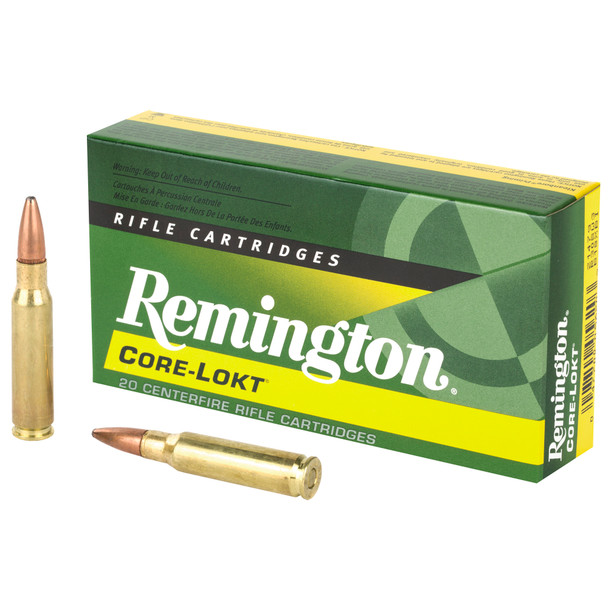 The deadliest mushroom in the woods for more than 75 years. Since 1939, more hunters have relied on Remington Core-Lokt than any other big game ammunition, and rightly so. It's filled more tags on more continents than any other load. Core-Lokt is the original controlled expansion bullet. Its time-proven performance has made it hunting's first choice for over 75 years. The tapered copper jacket is locked to a solid lead core delivering massive 2X expansion, weight retention and consistent on-game results. Available in soft point and pointed soft point versions, and in a range of bullet weights for virtually every centerfire hunting caliber made. Trust your next hunt to the best-selling hunting ammunition of all time.

MSRP: $27.95
Now: $24.95
Was:
Whether you're at the range with family and friends, practicing for your next competition, or headed to a training course to develop your skills, you want reliable, consistent, and affordable...

MSRP:
Now: $18.95
Was:
For varmint hunting, target shooting, training exercises or any other high-volume shooting situation, UMC centerfire rifle ammunition offers great value with absolutely no compromise in quality or...

MSRP: $43.14
Now: $27.99
Was:
There is something very satisfying about hitting a steel target so far away you can barely see it with the naked eye. Sierra Hollow Point Match King bullets and skilled Fiocchi ballisticians and...

MSRP: $27.95
Now: $24.95
Was:
Whether you're at the range with family and friends, practicing for your next competition, or headed to a training course to develop your skills, you want reliable, consistent, and affordable...

MSRP: $22.95
Now: $19.95
Was:
With a reputation steeped in tradition, Winchester has earned the moniker 'The American Legend' by delivering on their commitment to innovation and excellence. Winchester Ammunition, Silvertip, 9MM,...

MSRP:
Now: $250.00
Was:
Based on Geissele’s MK13 trigger developed for the U.S. Military Sniper Rifle system, the Geissele Super 700 trigger brings adjustability and safety features to the Remington 700 platform. This...

MSRP: $24.95
Now: $23.95
Was:
Fiocchi of America is widely recognized as a manufacturer of top quality, reliable, and consistent handgun ammunition around the globe. When you choose Fiocchi poducts you will have the peace of mind...