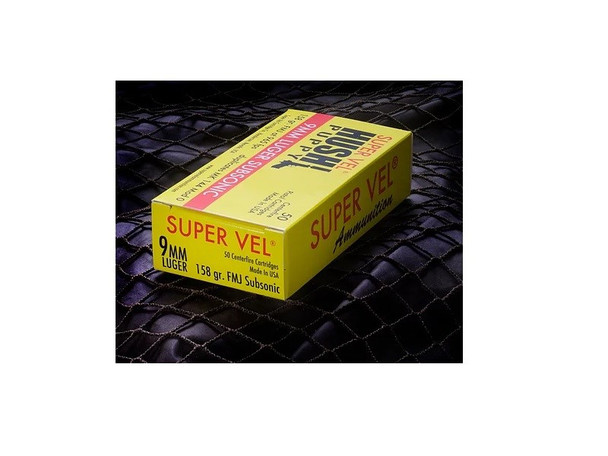 Super Vel Ammunition® manufactured the original 9mm subsonic ammunition used by U.S. Navy SEALs in Vietnam for their Mk 22 Mod 0 pistol, a highly modified S&W Model 39 with a slide locking device and a wipe-style silencer (Mk 3).  The ballistics for this load were specified by the Navy as a 158 gr. FMJ at 965 fps, which generates the same recoil impulse as standard 9mm supersonic ball ammunition. The Navy type-classified the ammunition as Mk 144 Mod 0. Super Vel Cartridge Company has reintroduced the Mk 144 Mod 0 ammunition to the same specifications as the original.

Additionally, Super Vel also offers a 9mm subsonic load using a 147 gr. FMJ at 900 fps which generates less of a recoil impulse than the Mk 144 Mod 0, so is softer shooting. It's ideal for practical shooting competition (IPSC and USPSA) with a power factor of approximately 130.

MSRP:
Now: $16.99
Was:
Fiocchi 9mm 158gr FMJ subsonic Fiocchi of America is widely recognized as a manufacturer of top quality, reliable, and consistent handgun ammunition around the globe. When you...

MSRP: $21.95
Now: $19.95
Was:
Full Metal Jacket projectiles are the ideal choice for recreational target shooting and extended training sessions at the range. When you want great value without sacrificing quality and performance,...

MSRP: $20.95
Now: $18.95
Was:
Blazer(R) handgun ammo is everything you may need. Whether it be indoor range training sessions, maintaining those pesky pests or sport shooting from small game to casual plinking. Blazer is a great...

MSRP:
Now: $16.99
Was:
Fiocchi 9mm 158gr FMJ subsonic Fiocchi of America is widely recognized as a manufacturer of top quality, reliable, and consistent handgun ammunition around the globe. When you...

MSRP:
Now: $12.13
Was:
Speer Lawman 9mm 147gr. TMJ Loaded with the finest projectiles and fueled by the most consistent primers and propellants, Speer ammunition provides trusted performance for self-defense and...

MSRP: $899.00
Now: $759.00
Was:
Dead Air Odessa-9 Silencer There are things we didn’t like about the current choices of handgun silencers. And you probably have the same gripes. Most of us have lived with these...

MSRP: $7.00
Now: $5.99
Was:
The 42 grain lead round nose bullet is heavier than traditionally available rounds, but isn't so heavy as to cause instability. While "harder hitting" and ."22lr" aren't usually...

MSRP: $29.00
Now: $24.99
Was:
Gemtech subsonic ammunition features a 208 grain polymer tipped projectile that provides excellent stopping power making it an excellent deer or hog hunting round and perfect for home...

MSRP:
Now: $4.99
Was:
S&B 22LR Subsonic 40gr 50rds Sellier & Bellot subsonic ammunition offers a lead round nose that is great for the range or for use on small varmints. The subsonic velocity makes this...