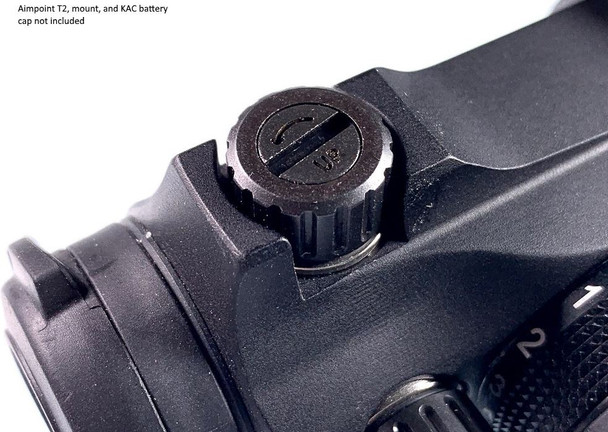 SKU:
ATA
UPC:
MPN:
ATA
Availability:
In stock if you can add to your cart!
Shipping:
Calculated at Checkout

ATA consists of 2 caps and 2 discs.
Having owned numerous Aimpoint T1s since 2007, and later, T2, we're quite fond of these small, tough, and fully enclosed dot sights.  Our only gripe has always been the elevation and windage adjustment arrangement.  If you're a T1/H1/T2, or Comp M5 user, you probably share our frustration, and have lost a cap or two over the years.
On a T1/H1/T2, to adjust either the elevation or windage, the user unscrews the cap, flips it 180 degrees, mates the two dots/protrusions with the two indentations on the sight adjustment, and rotates the cap, which in turn rotates the adjustment dial.
As often is the case, adjustment isn't done in a single step.  The user makes the estimated adjustment, fires to verify the zero, and repeats if necessary.  The caps are rather short and small, and get lost easily.  Such is the diminutive size of the caps it's not easy to dummy wire them.  In any case, the sight itself is small and lacks much usable space for the tethering wire to loop onto.
ATA (Adjustable Turret cap, Aimpoint Micro and Comp M5)  is a simple and robust solution.  ATA gives the user the ability to make adjustments to either the windage or elevation without removing the caps.
ATA consists of a pair of 17-4 SS billet machined cap with internal O ring, and a 17-4 SS rotating disc with an externally accessible top slot.  The disc has two dots/protrusions that mate perfectly with the two indentations of the adjustment dial on the sight.  To make adjustments to either the windage or elevation, the user uses the rim of a cartridge (.223, .308, .45 ACP, and 9mm were tested) or a coin to rotate the externally accessible disc of the ATA.
ATA's caps are serrated to assist in its installation.  There are 12 serrations total, matching the tick marks on the inside of the factory T1 cap.
The internal O ring prevents undue moisture from entering the ATA. In water immersion testing, ATA's ability to keep out water is on par with the single piece factory cap, to the depth of 77ft.  To wit, T1 and T2 windage and elevation adjustments are water-resistant even without the caps, they can't be taken to Aimpoint specified depths without the caps on, Aimpoint only warranties the sights to the advertised depths with the caps installed.  When installing the ATA, please do not remove the O rings already present on the sight.
ATA is billet machined in 17-4 stainless steel, and QPQ treated.  ATA is shipped partially assembled (O ring is installed inside the cap, the disc is not installed inside the cap).  It is far faster and easier to install the ATA on the sight with the cap and disc separated (instructions are provided on the back of the card).
In place of the factory marking UP/R with a counterclockwise arrow, ATA's discs have the counterclockwise arrow, but individual caps for UP and R.  As much as it may seem common sense that the elevation adjustment is always on top, and the windage adjustment is always on the side, the marking UP/R can be confusing to new shooters.  At the risk of being redundant, the ATA disc with the UP engraving is installed on top (for elevation), the disc with R engraving is installed on the right side (for windage).
ATA is shipped as a pair of caps and discs (one with UP and a counterclockwise pointing arrow engraved, and another with R and a counter clock wise pointing arrow engraved).  ATA caps ship with lubricated O rings installed.
ATA is proudly made in USA.  U.S. Patent No. 11,054,218
NOTE:
The adjustment caps on the T1/T2 are NOT interchangeable with those on the M5.
ATA is shipped with the internal O ring already installed.   It is a good idea to keep the O rings (both the O rings on the base of the adjustments, and ATA's internal O rings)  lubricated with silicon based lubrication.   In a pinch, petroleum jelly can be used as a substitute, but we recommend using the correct lube (silicon based O ring lube) for the ATA.
ATA caps should remain stationary when the discs are rotated, though it is acceptable for the ATA caps to rotate 90 degrees in either direction as long as the caps still apply pressure on the O ring on the base of the adjustment.  When there is excessive cap movement (i.e. the caps easily moves in unison with the disc while making adjustment), silicon based O ring lubricant should be applied to ATA's internal O ring.
View AllClose

MSRP:
Now: $42.00
Was:
Specifically designed and purpose built for AR15s and M16s with ambidextrous charging handles, the LDFA is a snag-free, rimless forward assist with a small footprint.Both the LDFA and ABC/R designs...

MSRP:
Now: $48.00
Was:
The advent of the ambidextrous charging handle, along with other ambidextrous controls, is a boon for AR15/M16 users, but it is not without unintended consequences.   The forward assist rim is...

MSRP:
Now: $48.00
Was:
The advent of the ambidextrous charging handle, along with other ambidextrous controls, is a boon for AR15/M16 users, but it is not without unintended consequences.   The forward assist rim is...

MSRP:
Now: $18.00
Was:
The EMR-H features a slightly curved button surface to fit the natural curvature of your finger. The form fitting curve, along with horizontal serrations, create a self centering surface that...

MSRP:
Now: $22.00
Was:
TGF (Trigger Guard, Forward Controls) is available in standard (straight) and winter versions. Both are machined from 7075 aluminum, they do not have spring loaded detent for the front, but use a set...

MSRP:
Now: $318.00
Was:
CONDITION ONE MODULAR MOUNT-30MM 1.93" (ASSAULTER HEIGHT) BLACK The Condition One Modular Mount is Badger Ordnance’s answer to a growing demand for modularity in optical platform mounting...

MSRP:
Now: $564.95
Was:
The Radian Model 1 Upper Receiver and Hand Guard are precision CNC machined as a matching set, structurally reinforced in critical areas for improved strength and rigidity. The upper receiver is cut...

MSRP:
Now: $330.50
Was:
This KAC 30mm 1-Piece Scope Mount is constructed of lightweight aluminum and is compatible with any Picatinny-type top rail. It is the scope mount that was developed for use in the M110 SASS rifle...