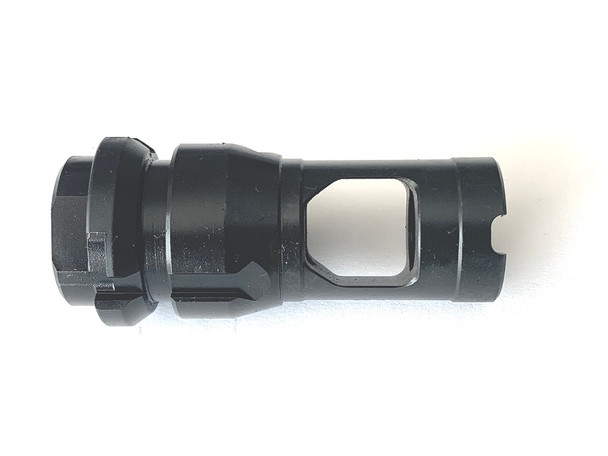 1215KM (5/8 x 24)is our latest offering in the Dead Air sound suppressor mounts line.  Threaded for 5/8 x 24, 1210KM is a Keymo compatible brake, compatible with all Dead Air 30  caliber sound suppressors.
We don't like brakes for ARs, they're loud and obnoxious.  While a brake will reduce felt recoil, it has unjustifiable compromises in increased concussion, noise and flash signature, one also wouldn't want to use a brake from inside a vehicle or indoors, these are trade offs a flash suppressor doesn't have.   That said, a brake for a sound suppressor does have its use as a sacrificial first baffle to increase the longevity of a sound suppressor.  For this reason, there won't be a 1215 or 1210 (sans the Dead Air Keymo mount interface), 1215 design will solely reside on 1215KM (1/2x28) and 1210KM (5/8x24).
1210KM is a single chamber brake, with a baffle like chamber forward of the ports (dear ATF, this does nothing to reduce the decibel).  The tines on top and bottom that connect the Keymo mount to the front chamber are of symmetrical, we think a smaller/thinner top tine to force more gas upward is unnecessary.
Let's do away with ambiguities and insinuations as to what it is and what it does, 1210KM is a brake, it'll be loud, and its concussion will kick up dust visible from the next county if you shoot it from a prone position without a sound suppressor.  1210KM is meant to be used with a Dead Air sound suppressor attached.
1210KM is designed to have less concussion than most brakes.  In terms of felt recoil reduction,  most brakes are similar in performance.  In the old days, some tank guns brakes are nothing more elaborate than a tube mounted perpendicular to the bore forming a T shape, it doesn't take much to make a brake that works.  If one is to look at old tank gun brakes, he will soon realize these tank gun brakes and most muzzle brakes for small arms today bear surprising resemblances and design.  To make a brake less offensive is far more difficult.  In our experience, Knight's Armament's MAM brake is probably the best in that category, it's also very costly.  1210KM follows our design philosophy, it's a simple and effective brake.  It does what it's designed to do, and does so without making unsubstantiated claims.
We tested the 1210KM against a host of brakes and flash suppressors.  Flash suppressors are the least concussive.  The one we know to be the most offensive was as loud, concussive and obnoxious as ever.   Nothing we don't already know.
The real surprise is 1215KM's performance. To wit, even though the Mk12 brake is the 1215KM's inspiration, it is still an FCD design, we did not use most of the Mk12 brake's features. The attributes that helped 1210KM even LESS concussive: a slight larger than 30 cal exit hole (we opted to follow Dead Air's specifications). The ports are not angled like the Mk12 brake. The larger bore size makes for a less effective brake, but it's .223 we're talking about that doesn't even need a brake to begin with, but it does have significant impact on noise and concussion. The flat sides of the port don't direct gas back to the user, or bystanders behind the shooter. 1215KM's design goals were not only met, but exceeded.
Machined in 4140 steel, heat treated and black nitrided.
5/8x24
Length: 2.402"
Weight: 3.81 oz
Forward Controls Design is an authorized licensee of Dead Air suppressor mounts.
Proudly designed and made in the USA.
CAUTION!
1210KM has wrench flats for torquing it on the barrel.  Do not use a screwdriver and insert it into one of its ports to torque it.  With 30ft lbs of torque, using a rod or screw driver will cause damage to the muzzle device.
JMW (Joint Muzzle device Wrench) was designed specifically for use on suppressor mounts: https://www.forwardcontrolsdesign.com/jmw-joint-muzzle-device-wrench.html
Screw driver not included (but seriously, use a 3/4 wrench, armorer's wrench, or JMW, not a screw driver.)
View AllClose

MSRP:
Now: $91.59
Was:
RCB-KM DEAD AIR KEYMO® DETAILSThe RCB family is Cobalt Kinetics solution to solve excessive side blast/ concussion out of large port brakes. Our approach was a simple one, to control the...