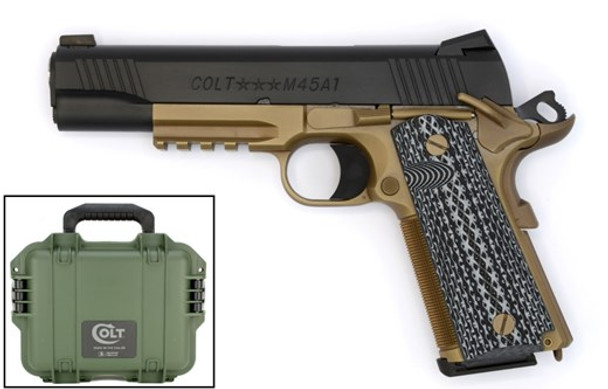 More than 100 years ago, the Colt 1911 was chosen as the official sidearm for America’s Armed Forces. Today, a Colt 1911 is once again proudly serving at the side of our country’s military. After a rigorous selection process, the United States Marine Corps selected the Colt Rail Gun as their Close Quarters Battle Pistol (CQBP). This marks the first time since the end of World War II that a Colt 1911 is being shipped to the United States Government.

To honor the brave men and women of this important staple of America’s military might, the Colt CQBP will be made available in limited quantities through the Colt Custom Shop. What makes the CQBP stand out is its two tone Cerakoted Stainless Steel Receiver and Slide, Novak® 3 Dot Night Sights and Flat, Serrated Mainspring Housing with Lanyard Loop. The pistol also features an Enhanced Hammer, Colt Tactical Ambidextrous Safety Lock, and a 5” National Match® Barrel.

The Colt Custom Shop performs hand fitting of critical mating parts and each firearm is test fired by the Custom Shop and supplied with the actual test target.

MSRP: $359.95
Now: $323.96
Was:
Perfect for PDW pistols the Maxim Defense Arm Brace gives you the adjustments needed to more comfortably shoot your AR pistol, and makes your pistol more compact for easier transport. Built on the...

MSRP:
Now: $3,499.99
Was:
The Honey Badger by Q®: Your new Personal Offensive Weapon. The original Honey Badger was developed at AAC by previous owner and Q CEO, Kevin Brittingham and his R&D team...

MSRP:
Now: $3,799.99
Was:
Costa Carry Comp Caliber Options: 9mm STI continues its push for honest, game changing innovation with the introduction of the Costa Carry Comp. Its island comp BBL is machined from a single...

MSRP:
Now: $2,500.00
Was:
STI TACTICAL DS H.O.S.T 4.0 9MM Capacity and accuracy are delivered in the most extreme environments with the new 2011® Tactical Double Stack H.O.S.T. Fixed tactical ledge sights are up to any...

MSRP:
Now: $3,999.00
Was:
STI DVC Omni 9mm The Latin meaning for Omni is “all” and the DVC Omni is no exception. The DVC Omni encompasses our 2011® technology as well as added features most appealing to all...