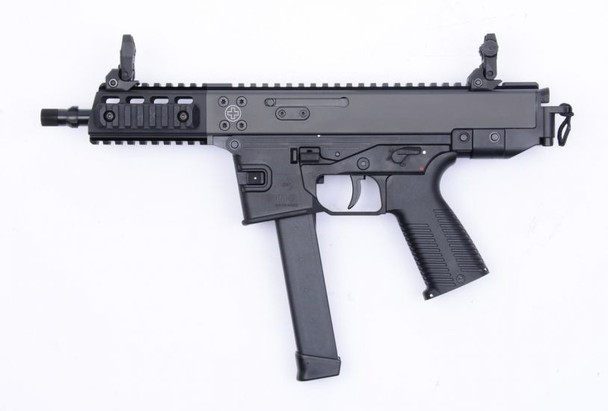 SKU:
BT-450002-2-G
UPC:
MPN:
Availability:
In stock if you can add to your cart!
Shipping:
Calculated at Checkout

Named for the grasshopper mouse, a carnivorous rodent that is known for eating scorpions, the GHM9 9mm Pistol is a made by Swiss arms manufacturer B&T. The GHM9 pistol is built on a direct blowback operating system with a built-in recoil buffer spring. All of the controls on the GHM9 are ambidextrous and the charging handle can be positioned on the right or left hand side. The 6.9” barrel of GHM9 is free-floated adding to the accuracy of the pistol and reducing the time it takes for the barrel to cool down after rapid fire.

The upper receiver of this GHM9 is one solid piece and features Picatinny rails at the 12, 3, 6, and 9 o’clock positions for mounting optics and accessories. The lower on the other hand has been outfitted to accept common Glock magazines, including the 33-round extended magazine. In addition, the rear of the pistol has a mounting surface for attaching a folding pistol brace or for turning the GHM9 pistol into a GHM9 short barreled rifle by attaching a stock (after the proper NFA paperwork has been filed and approved). The GHM9 from B&T is an incredible PDW mixing Swiss workmanship and reliability with features that similar firearms fail to include.

Features of the GHM9 Gen 2 with Glock Lower:

MSRP:
Now: $9.50
Was:
B&T bumper pad for APC9/MP9/TP9/GHM9/KH9 magazine The B&T bumper pad made of elastomer prevents that even fully loaded magazines dropped during a magazine change, get damaged. Place...

MSRP:
Now: $3,250.00
Was:
Limited edition KH9 SD pistols.  These are a limited run.  All will be sold as pistols and will include either a telescoping brace, or stock, depending on the option selected. We will...