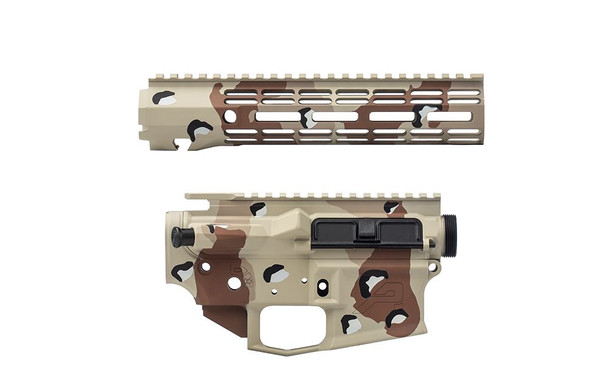 The 2022 Veterans Day Builder Sets feature the cult classic "Chocolate Chip" Camouflage expertly applied by Ely Yerian Designs. Available with matching furniture, these sets are the considerable foundation for your next build that go above and beyond a simple FDE finish.

The Six-Color Desert Pattern endearingly known as "Chocolate Chip" was developed in the 1970s for desert warfighting and saw extensive use by the United States between the 1980s and 1990s. This camouflage is often associated with the Gulf War as that is where it saw extensive use by American soldiers.

This builder set includes the finished pieces you need to assemble your own Chocolate Chip Camo M4E1 Rifle. The set includes an M4E1 Threaded Upper Receiver, M4E1 Lower Receiver and our ATLAS R-ONE Handguard all with this exclusive finish. This finish is available one time only and in limited quantities, so get it while you can!

MSRP:
Now: $107.99 - $149.99
Was:
DETAILS The ATLAS S-ONE is the newest addition to the Aero Precision Handguard lineup. Machined from 6061-T6 Aluminum, the S-ONE line of handguards are designed with size and weight in mind,...

MSRP:
Now: $499.00
Was:
The new MKII version of the GGP-S Series brings a new level of customizability never before seen in GGP rifle receivers. The Billet Receivers are precisely machined from 7075-T6 Aluminum for a...