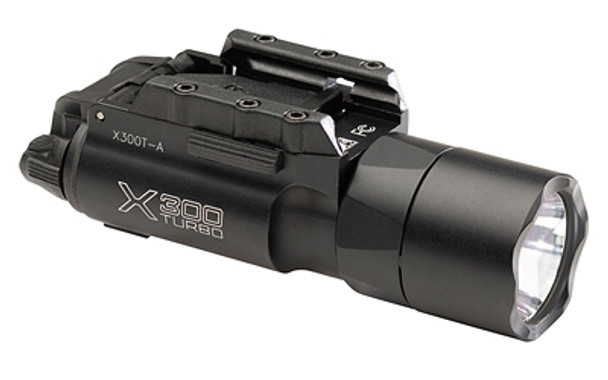 The all-new SureFire Turbo series pushes the limits in both handheld and weapon-mounted lights to give you the upper hand in any hostile encounter, near or far. Every Turbo model delivers high-candela illumination that reaches out to extreme distances. Our tightly focused Turbo beams are ideal for LE and military use, where piercing through tinted windows or assessing threats from a safe distance can provide a crucial advantage. You can count them to offer the far-reaching light you need while also retaining a corona of diffused light, so you maintain situational awareness. And they deliver the same proven durability and dependability that’s synonymous with SureFire.

Powered by two 123A lithium primary batteries, the X300T-A generates 56,000 candela of high-intensity into a compact, handgun-practical form factor. In addition, all Surefire high-candela WeaponLights feature reliable, intuitive switching, and they can be accessorized with the most comprehensive switching options in the industry. SureFire Turbo Series models are engineered to take a beating and thrive in any environment, just like when Surefire pioneered high-candela illumination tools two decades ago. There's no room for compromise when you depend on your equipment to save your life. That's why every SureFire Turbo Series model is constructed of rugged, lightweight aerospace aluminum, Mil-Spec hard-anodized, and O-ring sealed to keep out the elements. As a result, they're the best-performing, most feature-rich illumination tools in their class. Some things never change.

MSRP:
Now: $296.00
Was:
This enhanced version of our best-selling SureFire X300 Ultra now delivers a stunning 1,000 lumens of LED-generated output focused by a precision TIR lens, creating a far-reaching...

MSRP:
Now: $296.00
Was:
This enhanced version of our best-selling SureFire X300 Ultra now delivers a stunning 1,000 lumens of LED-generated output focused by a precision TIR lens, creating a far-reaching...

MSRP: $1,000.00
Now: $950.00
Was:
Sons of Liberty Gun Works believes in Quality Mil-Spec or better parts. They believe there is no substitute for quality and that your gun should be built right the first time, ready for hard use...

MSRP: $289.00
Now: $269.00 - $278.00
Was:
The Micro Scout Light Pro is the most compact WeaponLight to bear the Scout Light name, designed and precisely engineered from the ground up to deliver close-quarters illumination with minimal impact...