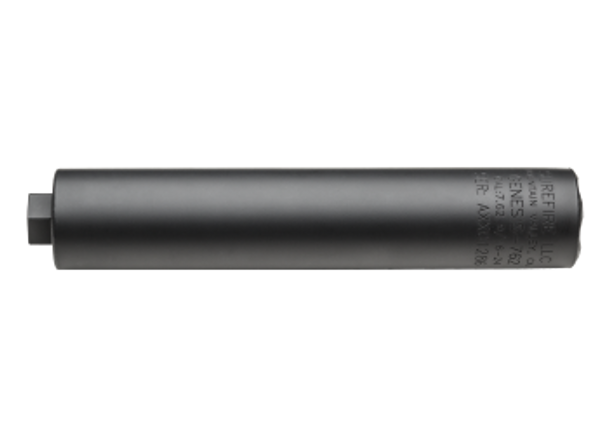 The best-in-class Genesis 762 thread-on suppressor—member of the SureFire Genesis Series—boasts the ultimate sound attenuation of any suppressor ever built for 300 Black Out (subsonic or supersonic), .308, and 300 Win Mag. This versatile suppressor is also very effective in suppressing the 5.56 mm round. This unprecedented performance is due to a proprietary stainless steel baffle system that only SureFire—winner of USSOCOM’s most rigorous suppressor trials ever—could design and build.

Designed primarily for hunting, recreational shooting, and tactical applications (such as use with a precision sniper rifle or a PDW, personal defense weapon), the GENESIS 762 is compact and lightweight, but also very rugged since it’s built to SureFire’s exacting standards—just like our SOCOM and SF Ryder Series suppressors. It’s constructed of US-mill certified stainless steel and it also features a high-temp alloy Inconel blast baffle, which greatly enhances overall durability. And every Genesis model is coated with a rugged Cerakote™ finish, in either Black or Dark Earth, to optimize durability and appearance. All these features make the Genesis 762 rugged enough for full-time use.

Export of the commodities described herein is strictly prohibited without a valid export license issued by the U.S. Department of State, Office of Defense Trade Controls, prescribed in the International Traffic in Arms Regulation (ITAR), Title 22, Code of Federal Regulations, Parts 120-130.
View AllClose

MSRP: $1,099.99
Now: $969.99
Was:
SureFire SOCOM556-RC2 - Black When SureFire submitted its SOCOM556-RC suppressor for consideration by the US Special Operations Command (SOCOM), we expected that the road to certification...

MSRP: $449.99
Now: $399.99
Was:
Taken from the German word for Hunter, the “Jaeger” is designed to provide hunters with superior sound and recoil reduction when used on single-shot or bolt action rifles...

MSRP: $916.00
Now: $745.00
Was:
Dead Air Nomad-30 Lightweight. Versatile. Modular. The Nomad-30 exists for the everyday user. Designed to go everywhere you go, mounted on whichever rifle suits your job for the day. The...

MSRP: $485.00
Now: $374.99
Was:
PRODUCT FEATURES The Turbo® K utilizes a tubeless design made from heat treated 17-4 stainless steel along with a heat treated 718 Inconel® blast baffle. The combination of these...

MSRP: $849.00
Now: $699.00
Was:
Dead Air Sandman-TI Looking for ultimate silence from your precision rifle? The Sandman Ti™ is your huckleberry. With its direct thread attachment and titanium tube it’s the perfect...