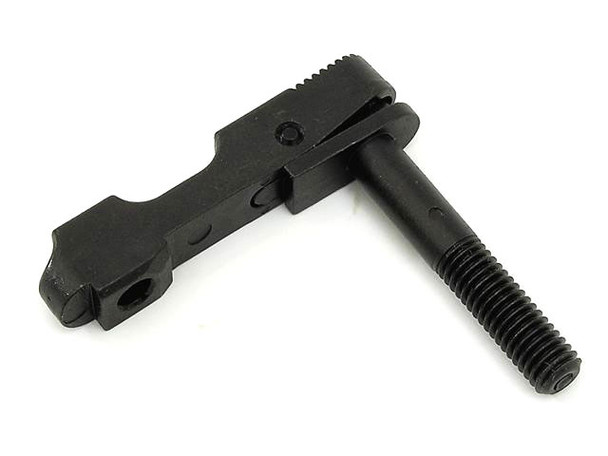 The Norgon, LLC Ambi-Catch™ is a patented "drop-in" replacement of the original magazine catch for M16A2 Rifles, M4 Carbines, AR15 Rifles and other firearms that use an M16 type magazine. Norgon's improved magazine catch eliminates magazine retention problems that are caused by the "issue" magazine catch.  When installed the Ambi-Catch™ also gives both right and left-handed shooters the flexibility to choose from several different magazine release methods.

Serrated Depression Surface - Provides a "non-slip" surface for positive depression. Depression surface is located on the same axis as the original magazine release button (ejection port side of weapon). Depression of this surface disengages the Engagement tooth from the magazine slot releasing the magazine.

Pivot Boss - Acts alone or in unison with the Forward Boss to provide protection from accidental release. Depression of this surface has a neutral effect on the action of the lever.

Forward Boss - Acts alone or in unison with the Pivot Boss to provide protection from accidental release. Depression of this surface actually forces the Engagement tooth into a positive engagement with the magazine slot.

Engagement tooth - Increased dimensions provide for a more positive engagement with magazine slot. Bevels at bottom and rear of tooth allow for smooth insertion of the magazine into the weapon.

Pin - Pivot pin is hardened to the same specs as Lever and Base ensuring long life and durability. Large head of pin is captured within the weapon at rest and cannot drop out when primary magazine release method is used. Easily removed by depressing the small end of the pin with the nose of a bullet or ball point pen (opposite side not shown).

Base- One piece design is rugged and durable. A cavity houses the Mil-Spec spring (extractor spring-not shown) which provides positive tension to the Lever. The threaded portion of the shaft is machined for precision engagement of the threaded orifice of the original magazine release button.

MSRP: $29.00
Now: $27.55
Was:
2A Magazine Catch Assembly - Grooved Button and Catch The 2A Armament magazine catch offers innovative styling and functionality in two different options.  The magazine button and catch are...

MSRP: $29.00
Now: $27.55
Was:
2A Magazine Catch Assembly - Pocketed Button and Catch The 2A Armament magazine catch offers innovative styling and functionality in two different options.  The magazine button and catch are...

MSRP: $29.00
Now: $28.99
Was:
The Geissele Maritime Bolt Catch is designed with the warfighter in mind and will work with any lower receiver designed to accept a mil-spec M16/M4 Carbine bolt catch. The increased surface...

MSRP: $39.95
Now: $38.95
Was:
Forever the AR15 has been a right handed person's tool. With Ambi controls evolving, it's becoming more of a tool that everyone can use, even left handed shooters! This Ambi Mag Catch works in place...